“Wash away the heaviness that lines
The contours of your soul
Until it’s as light as an alabaster sunset.
Forest fires may burn amid a pandemic.
During times like this,
You fight to rewrite each story into a triumph.”

–Orlena Shek (from the forthcoming poetry anthology Emerging from the Smoke: A Collection of Warrior Voices) 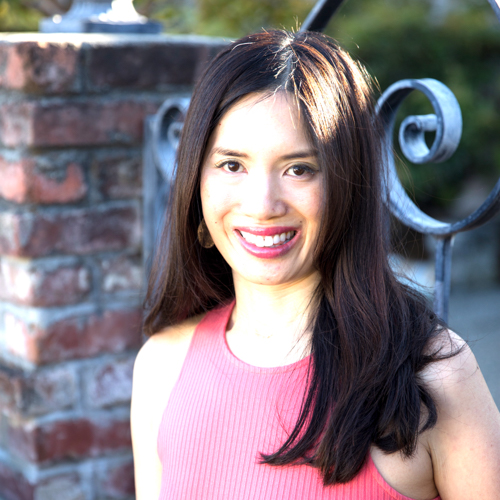 EMERGING
FROM THE
SMOKE
Orlena Shek

“Wash away the heaviness that lines
The contours of your soul
Until it’s as light as an alabaster sunset.
Forest fires may burn amid a pandemic.
During times like this,
You fight to rewrite each story into a triumph.”

–Orlena Shek (from the forthcoming poetry anthology Emerging from the Smoke: A Collection of Warrior Voices)

“How do you get through a day? How do you live with the disabilities that you have?”

Orlena Shek looked at the faces of students attending her Zoom talk for her alma mater, Castilleja School, an all-girls school in Palo Alto, CA. The year was 2020 and Orlena was nearly a decade into recovery from a severe stroke she had at age thirty-three.

“In your life,” she told the girls, “unexpected things are going to come up and you may be physically incapacitated, but you need to be mentally strong. My philosophy is “Mind over Matter,” so I strengthen my mind to use it to overcome any physical limitations I may have.”

In 2011, Orlena was an extraordinarily talented open source lawyer for a tech company based in Sunnyvale. Attorney Anne Hoge, a former colleague, wrote that Orlena was “highly respected by her clients and peers, someone with a brilliant legal mind, an ability to make things happen, and a way of inspiring those around her.”

On December 29, Orlena was working from home and decided to take her twenty-one-month-old daughter on an errand during her lunch break. As Orlena was driving on Route 92, her vision blurred and a headache grew. She realized she needed to get off the freeway to safety, at which point she lost control of her car and crashed into the center divider of the highway.

While both mother and daughter survived the accident, Orlena’s headache became unbearable. Her nanny came and picked up her daughter. Her siblings, in town for the holidays, picked Orlena up and took her home. When Orlena got home, her head was still killing her, so she called 911 herself. Then she collapsed.

Orlena had experienced a massive hemorrhagic stroke on the right side, one that less than 30 percent of people survive.

Fortunately, the on-call doctor in the ER had worked with Dr. Gary Steinberg, a world-renowned expert on “moyamoya” disease at Stanford Hospital. He suspected moyamoya and to stabilize Orlena and keep her alive, he transferred her to Stanford where she was put into a medically-induced coma for almost a month. She was then officially diagnosed with moyamoya.

In Japanese, moyamoya means “a puff of smoke.” Patients with moyamoya have an abnormal vascular network located in the base of the brain. When Dr. Steinberg and the Stanford team felt Orlena was stable enough from the stroke, they performed two successful brain surgeries. Team Orlena quickly formed. It consisted of her dedicated husband, her parents, daughter, and her siblings and in-laws. She was nearly six months in the hospital recovering and then she went home around Mother’s Day in 2012. Then began her 10-year rehabilitation.

Though her work had been a big part of her identity, she left her career to focus on her rehab and her family. Her team continued to support her during her recovery, but she also exercised that mental strength she told the students at Castilleja about. She credits her parents and grandparents with instilling that strength and resilience in her. She recalled their unwavering capacity to see the positive and to overcome hardship. “My mother always saw the world through her perpetual sunny outlook,” she said. Orlena’s optimism, her doctors will attest, helped her save her own life.

Anne remembered the aftermath of Orlena’s stroke. “I had the sorrow of watching her battle through extensive hospitalization and rehabilitation, and move away from her legal career.” But through it all, she said, Orlena has risen “with her characteristic joy, strength, and spirit.”

Orlena eventually followed her intuition to sign up for a creative writing class at a local community college. She found that writing was a salve to her bereavement over the loss of her mother. Though she had never been to therapy, it was therapeutic to write her words out on paper, and it helped her heal. It helped her heal so much that poetry became a major part of her recovery.

She joined a Facebook support group started by Tara MacInnes, also a patient of Dr. Steinberg’s, and a long-time moyamoya advocate who launched a movement to bring awareness to the rare disease via World Moyamoya Day. When the pandemic shut the world down in March 2020, the moyamoya survivors began to share their poetry in their Facebook group.

Orlena was drawn to their writing, what she calls “Warrior Poetry,” and as she began to write some of her own, an idea emerged in her mind: to collect the poetry and publish it in one volume. If she gleaned so much from these words of perseverance and hope, others would, too. More, this would be a way she could honor her parents on a level that felt fitting to the monumental role they had played in her life.

This past October, Orlena lost her father, who had always provided her constant love and support. “He was so gregarious and charming and I spoke to him almost every day.” From her grief, Orlena again connected with her need to honor her parents’ positive influence on her life.

She continued compiling original poems and haiku from her fellow warrior-survivors, a project that she now saw as a love letter to her parents. An excerpt from her poem, “When Night Descends,” reads:

“Don’t be afraid if it shrouds the truth that was meant to set you free.
Dance into the darkness with your partner, to keep time with hope
Because when morning breaks amid the stillness of your faith – We will carry on.”

In photos and words, the end of the collection provides some history of Orlena’s parents and grandparents that not only honors them, but also shows how they passed along the wisdom and strength that have held her up and kept her going.

Set to be published in 2021 by Archway Publishing from Simon & Schuster, Emerging from the Smoke: A Collection of Warrior Voices is the fruit of Orlena’s collaboration with 20 other warrior-survivors of various conditions like stroke or moyamoya. Offering words of comfort for current and future survivors, the book showcases what it’s like to “emerge from the smoke” of stroke or other health challenges and what people can learn from listening to these survivors. It also provides a resource of information for stroke or brain injury survivors and their families.

“Unanticipated attacks on one’s health can leave a person isolated, resentful, and self-absorbed,” wrote Elyce Melmon, a poet and playwright in the Bay Area. Instead, she said, Orlena proves the opposite with the book. She shows that “camaraderie, optimism, and selflessness can be healing and rewarding.”

Orlena is excited about the cover art which is based on a scan of a moyamoya brain as a “puff of smoke” with artistic renderings of various stroke warriors “emerging” from or superimposed on that scan. One of the sketches is clearly Orlena herself striding confidently out of the smoke. The blue in the background, she pointed out, is official “moyamoya blue.”

Orlena acknowledged the difficulties she faces with a “trifecta” that may be unique to her: being female, disabled, and Asian amid the recent rise in Asian American hate facing her community in 2021. Along with her work advocating for stroke warriors, she volunteers with “Stand For Asians,” an activist group in the Bay Area. At the heart of these struggles, though, is hope and her positive attitude, just like her parents modeled for her.

“There’s always something profound to be learned from Orlena,” said Anne. “For me, how to live with grace, positivity, and fortitude in the face of adversity.”

Out of her positive attitude came the decision to share her experiences and use her voice to help others at organizations she cares about, such as Castilleja School, her former employer in Sunnyvale, local stroke organizations, and her former law school, Santa Clara University School of Law. The Pacific Stroke Association (PSA) honored her with an invitation to speak at their Annual Stroke Conference in 2019, and then at their annual gala a month later. She returned to speak at PSA in 2020 and 2021. A percentage of proceeds from Emerging from the Smoke will go directly to the Pacific Stroke Association. Orlena plans to expand her speaking engagements— and showcase the book—via her upcoming web site.

“When [Orlena] shared her journey battling this little known disease, I finally had a true appreciation of her strength and tenacity,” said former Interim Dean Anna Han, one of Orlena’s professors at Santa Clara University School of Law. “Where most people would have given up, Orlena not only conquered this terrible disease, she is promoting awareness and building a community for other sufferers.”

In the words of Dr. Steinberg himself, who wrote a beautiful foreword to the book: “This poetry anthology, spearheaded by Orlena, is a testament to her fortitude and determination that serves to inspire us all.”

“While suffering a stroke is a devastating, life-altering event that many patients initially imagine to be worse than dying, Just Say “Yes” to Life! is an uplifting book that teaches important lessons.

NOw Get the rest of the Stories